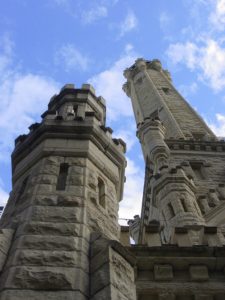 There doesn’t seem to be a consensus about when humans first learned to control fire, but it is safe to say it’s been a very long time and that discovery changed the course of history. It is also reasonable to assume that fire safety and uncontrolled fires plagued people from nearly day one. Clearly, our primitive ancestors didn’t worry about fire alarms and fire alarm monitoring in the way we do today, but there probably was someone in charge of keeping an eye on things and having a bucket of water nearby.

As for more organized methods, one of the earliest instances was in New York during the mid-1600s, where men were given the job of walking around the city watching for fires. They were equipped with buckets, ladders, and ringing bells. Later bell towers were introduced to provide a wider notification range. It wasn’t until the advent of the telegraph system that alarm boxes came into use that greatly assisted fire departments in their attempt to get to the fire location as promptly as possible. Other advances, such as fire hydrants which were patented in 1801 have also led to better control of fire in urban areas.

Today’s fire alarm monitoring systems are vastly improved allowing for prompt detection and response to minimize the effects of a fire. Although there is still nearly $8 billion in property damage each year due to fires, it is likely we will never again see devastation like the Great Chicago Fire in 1871 that killed roughly 300 people and destroyed over 17,000 buildings, although not surprisingly not the water tower.

Protecting your home or business is vital and here at Carolina Security Technologies, we offer the products and services that will enable you to do that. If you have questions about fire alarm monitoring for your home or business that can have your property standing strong like the Chicago water tower should a fire happen, give us a call today.